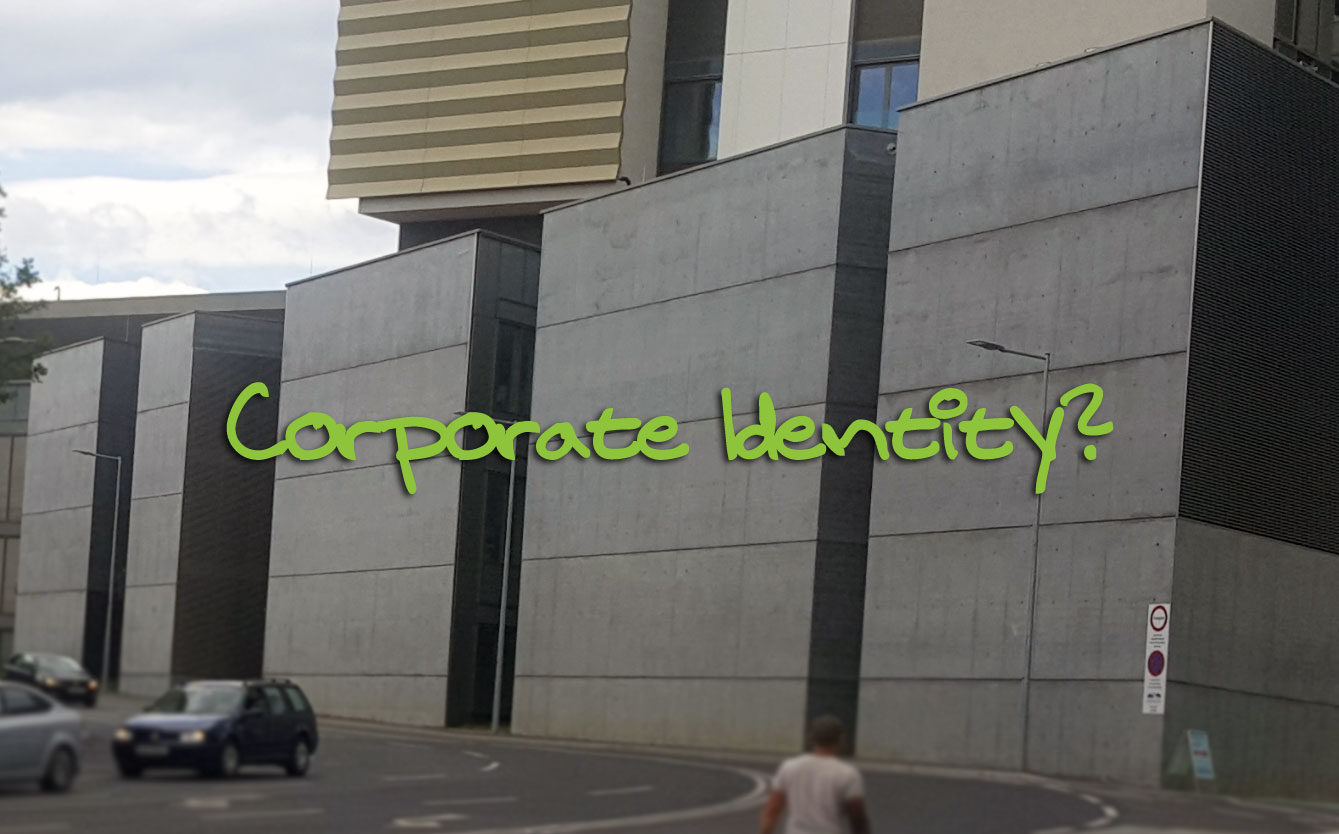 The windowless concrete walls on Hilmteichstraße in Graz will remain grey. A true story about how good ideas can fail due to ‘Austrian apathy’. Even if there is broad consensus.

The city of Graz remains gray. And here’s why.

In this blog, I usually write about search engine optimization. But this post is about a completely different topic: art in public spaces. To be more precise, it’s about a project of mine, the aim of which was to make the gray walls in my old hometown of Graz more colorful. Not by means of nightly spray can campaigns, but through persuasion, dialogue, and cooperation. In short, all the things that you do as a media consultant. But the project failed. Why? Because of the good old ‘Austrian apathy’ of a few decision-makers, and because of the already badly battered ‘corporate identity’ of a hospital company. What exactly happened is recounted below.

First things first: why am I so firmly convinced that colorful walls – i.e. areas in public space sprayed with large murals – are so much better than gray walls? Urban art connects people. It encourages reflection and dialogue. It creates space for artists to express themselves. It is freely accessible to everyone and free of charge. It is aesthetically superior to gray walls. In addition, urban mural galleries not only make the neighborhoods in which they are created livelier, but also safer. As a journalist and on my travels, I was able to convince myself time and again of the positive effects that arise when you create low-threshold, public art spaces. Examples can be found here, here, and here.

Urban art connects people. It encourages reflection and dialogue. It creates space for artists to express themselves. It is freely accessible to everyone and free of charge.

My project began when I returned to my hometown in 2018, after an extended stay in Colombia. During my first stroll through the neighborhood, I noticed an architectural innovation. At one busy spot near Leonhardplatz, there were suddenly five huge, grey, windowless concrete walls to be found:

In various Colombian cities such as Bogotá and Medellín, I had the opportunity to visit dozens of mural galleries, some of which inspire with overwhelming complexion. I was able to chat with some creators of such works of art. For the artists, the more space they have for a mural, the better. When I stood in front of the gigantic concrete walls on Hilmteichstraße for the first time, I did not see what there was, but what could be there: a gallery with five impressive murals that would amaze passers-by. From the very first moment, I was compelled by the idea of ​​making this vision a reality and finding a way to enable artistic use for the walls.

I didn’t remain idle for long and, being a media consultant, began to evaluate and contact the potential stakeholders for such a project, and to convince them of my idea. After all, I had several good arguments in store as to why the walls shouldn’t stay gray. For example, a mural gallery is not only interesting from the point of view of urban development, but also for tourism. I started contacting all sorts of people in Graz who might be interested in such a project and carefully laid out my strategy for the next steps.

It was surprising how much enthusiasm the idea seemed to meet – across different institutions and political lines. Some of my contacts were already spinning fantastic plans in the background: for a city-wide graffiti gallery with dozens of murals; for a regional or international urban art festival; for practice walls for new artists; and so on…

To be honest, for me personally it wasn’t that important who exactly is going to paint the walls with which motifs. For example, whether you invite internationally renowned artists or give priority to regional artists, or whether you let the residents or even the entire city vote on the motifs. The process of finding a consensus would have been a completely different matter. To me, the one important thing was that the walls didn’t remain grey.

All the enthusiasm shown for the project was an additional motivation. But eventually the owner would have the last word on the fate of the walls. As I quickly found out, the walls belong to a hospital that is publicly owned.

In an internal discussion, the project idea would likely meet broad approval, but there is one department head who already gets a fit of frustration just hearing the words “project” and “idea”.

So, with some encouragement, I contacted the company in question. First I reached out to the corporate communications department. Their reaction to the project idea was also extremely positive. The employees agreed to support me in the realization as far as they could. To have the best chance of approval once I applied to the board of the hospital, I was entrusted with three important pieces of information (partly off-the-record):

2. In an internal discussion, the project idea would likely meet broad approval, but there is one department head who already gets a fit of frustration just hearing the words “project” and “idea”, who would therefore most likely react with rejection.

3. Said department head is a close friend of the CEO and therefore has a disproportionate influence on the decision.

In short: the whole consensus behind me might be worthless compared to the typical Austrian apathy of a single department head. I still wanted to try my luck and – in coordination with everyone who already knew about the project – sent a request to the CEO. I explained the numerous advantages of using the walls for artistic purposes, as well as that there would be no costs or effort for his company, and that we would also like the board to be involved in the selection of the motifs.

The answer was brief: the gray concrete walls are “in this form part of the overall appearance” and “functional areas” and therefore not intended for a mural gallery, the written rejection explained.

This result was somewhat disappointing, although not unexpected. Citizens’ initiatives and objective arguments simply cannot keep up with a profound Bromance. So, I decided to try a new tactic that’s not exactly in my genes: patience.

After all, the CEO was already over 70 years old at the time and his retirement could not be too far away. I set up a Google alert for his (rather rare) surname to be automatically notified whenever a press release informs the public of his resignation. Then I could try my luck with his successor.

Three years later – in autumn 2021 – the time had come. I received not only one Google alert, but dozens, because the resignation of the CEO, despite his proud age, was not entirely voluntary. It came with a lot of public pressure and generated a corresponding media response. With the swearing-in of a new board of directors imminent, I figured the possibility of collaborating on an urban art project might come in handy for the company to brush up on its tarnished image.

I contacted the corporate communications department again, who again provided me with strategic advice. I was advised to give the new CEO some time to get used to the job and then approach him about the project idea at the best time.

I used the waiting time to reactivate old synergies around the project and to present it to various officials of the new city government, who all reacted enthusiastically and pledged their support. In February 2022, I submitted my renewed request to the new board of directors of the hospital to release the walls for a mural gallery.

The rejection came again by email:

Estimated Mr. Zeller!
After profound consultation, we came to the conclusion that the color white is part of our corporate identity and that we are happy to keep it in our external appearance. So, thank you very much for your offer, but we will not go any further into it.
Best regards,

The fact that many companies would like to whitewash their corporate identity is nothing new. In the case of a hospital, it can even be understood to a certain extent that the doctor’s-coat-color is somehow assigned special importance. The only problem is: the walls aren’t even white!

The question of whether a – publicly administered! – hospital even needs a “corporate identity“ or should instead show an open ear for citizens’ initiatives and public consensus, is put into the room.

Admittedly, I hadn’t been in Hilmteichstraße for a long time at that point, so I asked a friend who still lives nearby to take a photo of the walls as they look now – 4 years after they were built – and probably will forever look like:

Gray concrete that does not let through any light. Apparently, this is the corporate identity that this hospital wants. The question of whether a – publicly administered! – hospital even needs a “corporate identity“ or should instead show an open ear for citizens’ initiatives and public consensus, is put into the room.

A lesson from this story is: compared to Austrian Bromances and a deep love of concrete on the part of the public sector, good ideas are, to put it in Styrian jargon, a ‘Lärcherlschaß’ (literally: ‘fart of a skylark’).

I haven’t lived in Graz for a while, but this city is still close to my heart, and it hurts a bit to realize that Graz stays gray.

This article is also available in German.

This website uses cookies so that we can provide you with the best user experience possible. Cookie information is stored in your browser and performs functions such as recognising you when you return to our website and helping our team to understand which sections of the website you find most interesting and useful. Visit our privacy policy to find out more.

Strictly Necessary Cookie should be enabled at all times so that we can save your preferences for cookie settings.

This website uses Google Analytics to collect anonymous information such as the number of visitors to the site, and the most popular pages.

Please enable Strictly Necessary Cookies first so that we can save your preferences!